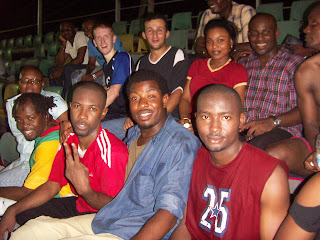 Went for my weekly friday night football at Astro-Turf's artificial pitch in Ikoyi. Well, I didn't play this week because I had injured a heel a few weeks ago and am still recuperating, so I spent my time running a commentary with Bolaji Alonge and Kayode Krakue. The commentary part is as important to this weekly ritual as the game. A few months ago, the management of Indomie Noodles playing after our game, decided a 'bribe' of their products would make us say nice things as we yelled from the stands. I've still got the stuff in my fridge.
But among the players this friday were Frank, host of the Nigerian version of "Who Wants to Be a Millionaire" and Charles Anosodo, TV Sports Show Host.
Also present were the musician, Rugged Man, who showed he had more skills than rapping, and a number of regular spectators and players.
In the picture, front row, 2nd from left, is Rugged Man, making the V-sign. Seated next to him in yellow is Kayode Peters, the TV and Stage Director. Seated in the row behind is Kayode Krakue (1st right)
Posted by laspapi at 12:19 am

pls my people,astro turf is a place to be.i must say,this project is unprecedented in this country.its an experience i'm delighted to be part of.i actually look forward to it every weekend...nice one laspapi...hector ginger

Hehehehehehehe Laspapi, i'm like so embarassed:D Eeyah, hope your leg gets better soon. I think the last time i watched football was 1996 when Nigeria won the All Nations cup or something,LOL. Have fun this weekend, i'm sure you've voted. Make sure you hide at home, 'cause all those agberos will be on the loose...

thanks for stopping by, hector.

@ omosewa- nothing to be embarassed by, 'sewa. The heel's healing (excuse the pun). We're all keeping a close look-out for the agberos aka party stalwarts. How are you doing?

I'm doing good!!! I have a lot to study, wanna help??:D Fashola won Lagos, i hope he makes positive changes. I was rooting for 'Koro though.Have a greattt week!

hehe- bet you have a Koro-ssive feeling now, 'sewa. Wish I could help with the studying but I must meet with the new governore- hehehe

And how far with the whisperer article? Been waiting ages already!

boa, where've you been? Best way to start, is to roll with us (for free) on a few fridays and then you can sort how you want it to be. Best to call me, sha. The location in Ikoyi is a queer one to describe

@ noni- watched cable all day, noni. Whisperer article is up.

I love this: "Best way to start, is to roll with us (for free) on a few fridays"

I imagine the humble-sounding US above means the high and mighty of lagos... alleluia!!!... the future of my blog is beginning to look bright o ... he he he