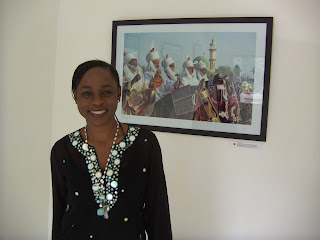 THE THEATRE OF DREAMS

Dreams can come true. The most incredible thing happened 2 days ago. I had a meeting with the C.E.O. of Terra Kulture, Bolanle Austyn-Peters, and at the end of the discussion, she had given me Terra's Hall where The Soyinka Season is being held, for free every Sunday, ad infinitum.

This means the biggest impediment to theatre production in Lagos has been removed with one magnificent gesture.

I have had more drama productions than anyone at the Muson Centre (which I and other theatre companies helped make the leading drama venue) but have sweated blood and tears to take it that far. The impossible conditions in which we produced major theatre dwindled the ranks until there was just a handful left... and then one or two.

But we have a hall now...and in a major Arts Venue located in the heart of one of the most secure areas of Lagos. (The things that matter to a paying audience).

laspapi is in charge of the project and is bent on making it an artistic and financial success. Basically, she's given theatre a lifeline.

There'll be space for other directors, room for profit sharing and invitations to those who can improve the work here (Frances Uku, please note).

Theatre has a new direction in Nigeria now. We have a home. Thank you, Bolanle.

Weldone! Wole..I am so happy for you and for what this means to stage production in Nigeria.

This is almost too good to be true. But BAP has always been an angel. Congrats, Wole. Everything Goood Will Come!

That's a laudable gesture from Ms. Austyn-Peters. Because of her generosity, the theatre will continue to flourish in Lagos. And you are doing a wonderful job with those productions too, laspapi. Keep it up!

Congrats! Been reading back issues of your blog and I am impressed with your work rate. More grease to your elbows or perhaps I should say more quality-synovial fliud to your humero-ulnar joint (God forbid Arthritis or effusions).
God bless

I like the intrinsic display of culture of Nigeria here. Will be your fan from now on.

jrO thats good news! Good on you.I must admit that I didnt enjoy soyinka poetry eva(yes I hear you gasp with shock:)I know all of his students from Ife will beat me) expect for 'telephone conversation' which I actually felt deeply, but his plays I enjoyed.Jero was by far my favourite,Satire at its very best.

Minwhile Papi, I read the last girl whispherer,didnt agree with sum sturves dea,but nevertheless a great piece. You should visit Ijeoma page(read her old posts when u have time) if youve never been,shez a fantastic writer.

Congratulations. Is that here? Dayum.

thank you very much, refined one.

@ d vixen- still celebrating here. As the writing in the molues say, "let my enemies live long and see what I will be in future"

@ babawilly- thanks for going thro the archives. Are you a doctor? I like the lay-man's terms better...less fearful...

@ izz- thanks for the nice words, izz

@ cheetarah- you didn't enjoy Soyinka's poetry? ok, I'll forgive you since you like his drama.
As for the Whisperer, I have to be careful what I write, there are too many intelligent people like you reading it.
I'll check ijeoma out. Never seen her old posts.

@ idemili- thanks, ide, thanks.

and KUDOS and WeLL DoNE to YOu lASpaPI :)

Yes oh. The Bush Doctor in the City. Will stick to lay man's terms, no wahala.

Sweet of her, Las... Am I glad for you! As they say, everything good will come in its time and your time is now!

@ babawilly- I remember your submission for the book. Extraordinary writing...

@ nyemoni- I reckon you're right, 'moni. I'm grateful to God.

congrats laspapi, i wanted to make at least one showing of the events, but they dragged us corpers out on a random week that managed to accomplish absolutely nothing, and so i had to make up for that by staying later at work.

Anyway enough excuses. So on to the whole short story thing. I finally have the stories. The bad news is that the competition is next week friday which places a burden on you. Still i am hoping that you will still be a judge. Anyway please email me back as soon as you can @ snazzy.rites@gmail.com. Thanks a log

Outstanding stuff, Pilgrim. Congrats and all. Here's to more success.

Oh wow! good for you! Congrats!!

Congratulations, all the best and may god's wisdom, knowledge and understanding be with you.

...eventually, no work done with much dedication & passion can go UNrewarded.
Death and the king's horseman was beautifully presented, to the casts; i doff my hat.
To the rebirth of theatre in Nigeria, patronisers won't be found wanting.

good for u and good 4 theatre. i wonder when i will finish from your archives. anyway, like what i've read so far, and i liked the play on sunday. will come again.


@ akin- thank you very much, akin

@ noni moss- its good to see that people are happy for the arts and for me. How've you been, noni?

@ regal 1- Thank you and Amen. This opportunity will help the Arts no end.

@ rethots- you were there? And no intro? Thank you for being so supportive. As for passion and dedication, I'm glad the rewards are coming in now.

@ eve- wow! you too? May I please meet the bloggers who attend these shows? Let me know what you think of the artistic stuff in the archives, Eve.

Congrats O! I can imagine how much you'd have been paying for Muson. Hopefully will be able to attend some of the shows.

Keep up the good work. i have memories of watching Ozigizaga ( or is it Ozagazigi) with my family when i was younger. i will be in Nigeria this december, i hope i will be able to see one of you shows.

@ Tayo- I wince when I think of how much has been lost in production, tayo. Looking forward to seeing you. Only one show left in the Season of Soyinka though (the 29th). However, other plays take off from the 5th of August.

@ inuke- looking forward to having you there. There'll always be a show on now.