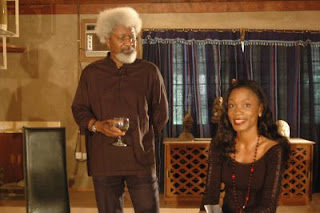 There were people in that hall on the day of the "jero plays", who couldn't stop to say hello for many reasons- the crush of the crowd; they had to leave hurriedly etc. I found out later that uzo, mrs. somebody, olawunmi, daddy's girl, babs house, bijinmi, omohemi benson, igwatala and many others were also there.

babaalaye stood by me and had a conversation twice about the lack of seats but didn't tell me whom he was till the next day...

"dearest, as you know, l have watched and supported your work from the background for years. Yesterday l saw the future and it is bright, you have hit the winning formula. Your adaptation of the Jero plays and running them back to back was genius and the twists in script hilarious. More grease. Why not run the popualar plays like "the jeros", "who's afraid..." etc on an ongoing basis? Think about it mai broda..."
Posted by laspapi at 7:31 pm

Labels: A Season of Soyinka

Lollll - babaalaye is still alive? Tell him to come back - I miss his blog! Again glad it went well. Does this mean you didn't have time for the girl whisperer? :-D (I'm greedy i know)

Yes O, I agree with Funmi.....the more you feature the shows, the more better it is for the genre.

All the best love.

Well done 'papi, very well done... I wish you more success! Is it possible that you have the "season" on CD? You should distribute it, I think! That should earn you some more money...just a thought!

You did so amazingly well.Both plays were superb! I felt so proud of you(Blog family *wink*).One thing though,don't rest on your oars I'm so sure your best is yet to come.I'm rooting for you.Well Done Laspapi.

I took a picture of you as proof of attendance. I'll send it too you ASAP.

lol.....thats funny.....when i went for olawunmis party i saw a few bloggers, but i didnt introduce myself to them till later.... **giggles**

totally agree with Funmi, id come to see the jero plays again if its on. i swear i havent had that much fun in a long long time. Laspipi well done!!!

I was there too and even though i didnt say a word to you. I admire what you have done. Well done and see looking forward to Theatre @Terra.

@ noni- that babaalaye is a spirit. You should have seen the way he came in. We'll talk soon.

@ anon- thank you. We'll be returning to the masters.

@ nyemoni- (who shares the same dazzling smile as her namesake)- We have some of the shows on CD and intend to make a project out of selling theatre on DVD just like the movie people. You're reading our thoughts. Thank you for coming, for being so supportive.

@ mrs. somebody- thank you for coming. I recall where you sat and how I tried to get that extra chair, but chimamanda had 3 people with her.

@ in my head- you should have spoken to me, I wanted to meet you. Thank you for coming, and I hope you make other shows. You'll send the pic?

@ nonesuch- ahhh, I really wish you had. It saddens me that quite a number didn't say hello. There'll be other shows though, and other opportunities.

typical me..late as usual..(no vex naija time is at work)..
i think funmi suggestions is fantastic, that is, if you can handle the schedule sha.
anyway from all the great reviews , i heard the show was a knockout, congrats ,extremely proud of you.
my little sis came 4 the show and gave you 5 stars.., but fear was catching her liver to say hi...hehehe

You worked hard, well done and good luck in the future.


On the play, congratulations.....I wish I could have seen the "Jero Plays" too.

i am so so so sure i left a comment on this thing...

hmm, groupie...did u delete my comment or was it a figment of my imagination?

My Storm- how are you doing? The wahala in putting things together for the Season was mind-bending but I'm glad it was all sorted.

@ toyin tomato- I'm going to take funmi's idea and try to make it happen. I wish your sister had stopped to say "hello". Please help me thank her for coming.

@ anon- thank you very much.

@ nilla- I wish you had seen "Jero", nilla. I'll speak with you soon.
In respect of comment moderation, those are signs of the times...

@ ammee- thanks, ammee, many thanks.

@ ~mimi~ delete your comment? It could never happen. You left it under the pic of Stella Damasus and the guitar player and it's still there

I was there too. I wish I could have met other bloggers, I kept looking at people and thinking that must be 36 or mrs somebody or olawunmi etc but no one matched the babaalaye I have in my head. Keep it up Laspapi, you are doing a good job.

@ for the love of me- thank you for being there, wish you'd stopped by to say hello too. Looking forward to having you at other productions (and you saying hi this time)

This is so nice everyone supporting laspapi.Even though l do not have a blog ,but l do read all your blogs and l feel l know you all.Well done laspapi ,l was there as well.

@ anon- thank you for being a part of the "Soyinka" experience. And you're right, I've found support from great friends online. Looking forward to seeing you at other shows.

Abeg can i get an invite when next there's gonna be another?

come, manda. The show's on every sunday.

my brother, i loved your adaptation of the Jero Plays. well done!!