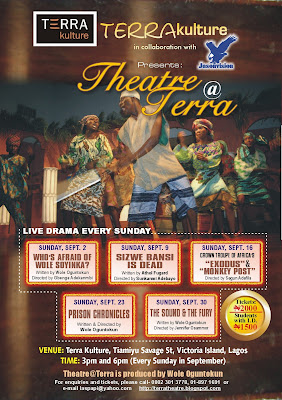 Professor Wole Soyinka's The Jero Plays will be staged again at Terra Kulture, Victoria Island, on Sunday the 26th of August at 3pm and 6pm as the project, Theatre@Terra gathers steam.

The following plays are planned for all the Sundays in September.

Time: 3pm and 6pm (Every Sunday in September)

Theatre@Terra is produced by Wole Oguntokun
Posted by laspapi at 3:02 pm

Sweet! Hope to be there on Sunday cos I really enjoyed reading the Jero plays as a teen...

Well done! I am so impressed by how much you have put together in a seemingly short period of time. I look forward to having a play to see every Sunday.

@ nyemoni- looking forward to seeing you again, 'moni. I think you'll like the Jero Plays.

why do u keep taunting me with posts like this?

hi Papi, i just caught up on the previous 3 posts, you sure do update fast!

sorry, catwalq, someday we'll combine to do the indian-naija thing...

@ ~mimi~ I'm alright, idol. Been busy with this weekly drama thing and trying to add tv to the mix. I remain your fan for life.

So we must come to Lagos to enjoy this eh?

The theatre doe not travel...?

ok, jaja, "don't annoy". The logistics of movement can be mind-bending but we have sponsors coming in through the door now who intend to help with this.