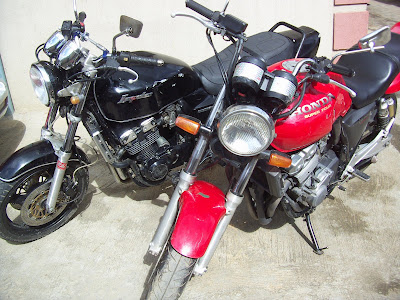 The bikes that laspapi bought.

Two 400cc motor-bikes, a Suzuki and a Honda, much too powerful for first-time bikers but life is short, let's live dangerously. One's for myself and the other for the hard-working production manager of Theatre@Terra, Olarotimi Michael Fakunle.

The man-hours lost in Lagos traffic are mind-boggling and I've been known to hop on a bike to beat the log-jams but it's much saner to trust myself on a bike than believe a complete stranger who probably arrived on the ferry from his village two days before and took his first bike ride 24 hours earlier, just because he alleges he's an okada rider.

Fallen off twice already, smashing a hole in the fence at the back of the house in the process of one of the fallings (swollen shin, bruised rib, sprained wrist) but I'm much better now, Thanks.

But really, I'm quite a ...ahem...hell's angel, now. The principles that govern bikes are very car-like.
Posted by laspapi at 3:21 pm

congrats on the new 'toys' i hope they dont cost an arm and a leg. Most of the guys riding the commercial bikes in my opinion used to be shoe makers with their wooden box roaming the streets of Lagos.

Please enrol in safety riding course at Honda Manufacturing Ota. the training is currently going on.

You got a bike!good for you!
I remember a while back when in lag,I was travelling that faithful evening and I was running late(luggage/ticket/everything was at home!!!)'cos I was in the hold up(fuel scarcity and it was a saturday!)
It wasn't funny at all...had to get out of the car to jump on an okada(motor bike in 9ja)...to take me home!
After that near miss of my flight,I decided to get a bike...but my folks forbade me to get one!!!
They were like "ahh Oloun maje"(god forbid!), another one was like "o fe fo ori e ni 3rd mainland bridge"(you want to break your head on 3rd mainland bridge!)!!!ooo well you did the smart thing jare Laspapi!

"Fallen off twice already, smashing a hole in the fence at the back of the house in the process of one of the fallings (swollen shin, bruised rib, sprained wrist)"

Congrats on the bikes but em... you seem to be doing just as good as the olokadas.

Have a great month of October.. Please always wear you helmet.. God bless

@ nonesuch- these bikes are necessities, honest. Had no idea there was a riding course at Ota. Sounds great, the distance is a problem, though.

@ nolimit- bikes have saved situations too many times. You cant leave an over-heating car when you have an appointment but you can hoist a bike over the divider onto another road.

@ buki- ehr, I'd rather I was the course of the injuries than some strange fellow. Would you take a plane whose pilot started flying the day b4? Yet we do that to these okada guys

@ dscr?be- gonna dress up like a ninja, love. You wait and see.

I know, makes sense to ride yourself, some of those okada guys are just crazy. Please wear a helmet, and any other protective gear necessary. LOL@breaking the fence, o ga. Rub aboniki on the parts that hurt, e pele.

papi, take am easy oh. u can break anytn except ur hands, need u to blog. lol. i feel u on d traffic thing jare.

LMAO! Papi on okada, sounds funny to me. Nice toys tough (with apologies to nonesuch), you didnt get the common ones... means you still want to ride like a big boy (sorry, man) that you are.

I want a bike too!!! When I get one my defence against the "dark side" will be well Laspapi has one HA!!! :)

Congrats, can I be a hell angel chick one time....tralalala

@ 'sewa- aboniki. I'd never heard of it. True. But my cast members roared when I read the name out. Apparently, they'd all used it. What planet do I live on? They say its peppery though. How are you, love?

@ esquire- if you don't differentiate the bikes through size, agberos will stop you all the time asking for their 'tithe'

@ mamarita- get goggles, darling, and away we go. I've faced the 'dark side' too, but I overcame by saying mamarita would get one in the near future.

i took my time and typed a very long comment that sounded distinctly mother ish...Blogger ate the comment but i am sure you can imagine what the words read like,,,,how have u been?

@ Uzo- I've been fine, love, and I can guess along what lines you must have wriiten on. I'll be very careful.
Because I know blogger can be strange, I actually copy long comments before I attempt to post them on sites.

i join everyone in urging u to please be very careful.

Kai, Laspapi. You are now an Okada driver.
Ah, you had an injury already?
We pray for God's protection. You are brave sha.
I cannot even drive a car in Lagos. The taxi i sat in on my blog had the engine switched off.
All the best with the bike and thanks for the birthday message