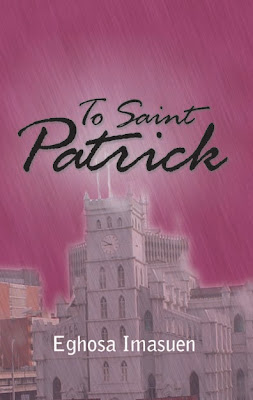 Kachifo Limited, publishers of Farafina Books, Farafina Educational and Farafina Magazine, is proud to announce the release of their latest fictional novel: To Saint Patrick.

This is to encourage new and upcoming writers who are discouraged by the belief that Farafina publishes only established writers.
The novel is a gripping and courageous debut from Eghosa Imasuen, one of the next generation of great Nigerian writers. Eghosa was one of the participants of the year 2007 Creative Writing Workshop organized by Chimamanda Ngozi Adichie.

It's the year 2003 in an 'alternate Nigeria,' and a prominent member of the NPN political party, veteran journalist Chief Johnson, has just been murdered. Two small time crooks are found with a bag full of his bloody clothes. They will take the fall to assuage the public, although some evidence suggests they may just be innocent... Is it politics as usual?

To Saint Patrick rewrites Nigerian political history, presenting the reader with a series of 'what ifs': what if Major-General Murtala Mohammed had survived the 1976 coup attempt, and had run for a 2nd term?; What if Babangida was simply on the sidelines—an honourable gentleman?; What if our democracy was healthy?
Posted by laspapi at 12:24 am

I'll look for it. I was trying to remember the Kachifo name the other day, i was looking names of Nigerian Authors.

@ descr?be
Not prestige o.
Chap's on a contract.
Available at:
http://www.kachifo.com/order/