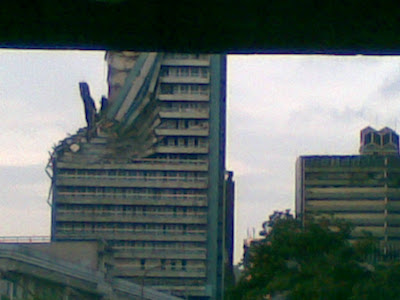 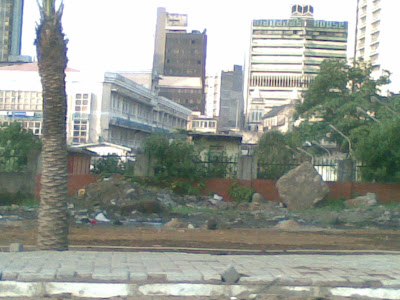 A couple of weeks ago, I put up a picture of a building that appeared as if it would crash any day on the heads of Lagosians, right in the city centre.

The government must have read something somewhere (maybe Governor Fashola and his commissioners read my blog :P) but it was announced on the radio that it would be brought down and down it came, safely too.

This should have been done a long time ago. Well done to the government though, it'll take a while to correct the many things about our city that have to be fixed but it's obvious real work goes on.

Pictures show the building a day before demolition and then a less dangerous landscape.
Posted by laspapi at 2:55 pm

Gov Fashola is not so bad afterall, i was rooting for someone else. Eko o ni baje under Fashola's watch truly.

@ 'sewa- I remember your candidate but Fashola's shown a strong sense of purpose.