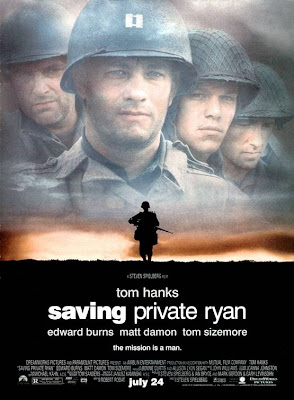 I saw one of life's moments yesterday. I sat watching bits of the 1998 Spielberg movie on World War II, 'Saving Private Ryan' when an incredible scene unfolded. A platoon of American soldiers led by a captain played by Tom Hanks, had just lost a friend to two bullets from the German Army, as they fought over desolate waste-land. They had tried to save him, shore him up with morphine but nothing worked. Two bullets in the stomach. He died. Blood everywhere, pumping out of the small holes in his body tillhis heart stopped beating.

Then they caught a German soldier who hadn't made it away on time. They made the German soldier dig a grave for their friend and as he dug, it was clear they intended to take their revenge on him for the death of their friend who had fought through thick and thin by their side.

The German soldier, still standing in the grave he was digging, looked up at them and began to beg for his life. He held on to one who had been friendlier than the others and had given him a cigarette, and began to plead in English with a strong German accent. He repeatedly shouted, 'I love America' and tried to climb out of the grave but was pushed back.

Then he sang the first few lines of the American anthem, brokenly, repeatedly, not fully understanding the words. He would sing two lines and start again and again.

The guns cocked around him and he shouted...'f**k Hitler' a few times as well in a desperate attempt to save his own life but he could still see his death in their eyes as they cocked their guns.

Then they pulled him out of the grave, and tied a blindfold over his eyes. And the Captain told the only American who could speak German to tell the prisoner to walk a thousand paces away from them, not looking back before taking off his blindfold.

As he walked away, stumbling over the rocky terrain, uncertain as to what would happen, I waited for the bullets that would knock him to the ground. But they never came. The captain made his platoon let him go.

In those few minutes, I saw the humanity of both sides and I fully understood the futility and senselessness of war. And also for the first time, I totally comprehended John Donne's words-

Every man's death diminishes me because I am involved in man-kind. Therefore, never send to know for whom the bell tolls. It tolls for thee.
Posted by laspapi at 11:29 pm

wow... the German soldier is either sensible, brave or crazy

Wars are indeed senseless.I'll watch this movie. The guy 'fought' for his life , eyahh.

Are there any plays in November?

Are you watching BBA3?

@ dscr?be- Hello love, I dont know how to describe him. I just know that he struck a chord so deep, I sat open-mouthed for minutes

@ omosewa- There are shows every month, beautiful child. Didnt see the Whisperer comment.

Havent been able to get MNET to activate my BBA 3 channel and been too busy to go their offices. We were supposed to indicate our interest in viewing the channel and I did it by SMS but nothing...

i love the Donne quote at the end. how r u doin papi?

Hiya,
You’ve been given an award, check my blog for more details.

interestingly,the same soldier returns in the final battle. This time,he kills one of the American soldiers who let him go..

@ the African- you know, I looked at that photo of the fellow who pushed the knife into the American in that struggle in the room and thought to myself, 'no, it cant be the guy they let go'. And then he went down the steps and passed the same moron who offered him cigarettes earlier and should have brought the bullets on time...

ok, that was a disturbing scene for me, really...