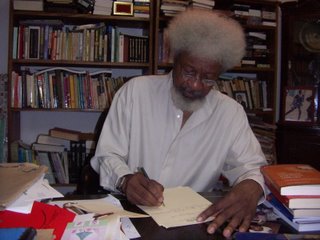 Every child needs a hero...

This afternoon, I went for a meeting with Professor Wole Soyinka, my childhood hero before my age entered into the double digits(and who's maintained this position with me till this time), minutes after he finished a press conference. Watching the journalists stream out of the premises, I had a chance to ponder again on the affairs of a man who has remained a sentinel for Nigeria through many decades.

At the press briefing, he spoke on General Buhari's Presidential ambitions..."This intervention has been provoked, not so much by the ambitions of General Buhari to return to power at the head of a democratic Nigeria, as by declarations of support from directions that leave one totally dumbfounded. It would appear that some, myself among them, had been over complacent about the magnitude of an ambition that seemed as preposterous as the late effort of General Ibrahim Babangida to aspire yet again to the honour of presiding over a society that truly seeks a democratic future..."

When we were alone, he attended to my business, one he himself had termed ambitious- the production of "A Season of Soyinka", sometime this year; a month when I would present four of his plays and one of mine, "Who's Afraid of Wole Soyinka?", at a major venue in Lagos under different stage directors. As he wrote a reference for me in that regard, I asked to take this photo. "Go ahead", he said.

On my way back to the mainland, I could see the evening press had rolled out his statement, one headline read, "Soyinka knocks out Buhari", another, "Kongi's latest fire".

Every child needs a hero. So does every nation. Amongst those of this country's stands the man, "WS".
Posted by laspapi at 4:12 pm

I think so too, mona.

He's one of the greatest. A friend and I stalked him at a poetry reading for Ken Saro Wiwa last year. I couldn't speak when I finally stood in front of him. What a silly little girl he must have thought...

I would love to be his assistant for like a month. You'd learn soo much!

Kongi rocks!!! He is so gifted...I read some of his books and get on my knees right after thanking God for his life. WOW
When are you putting up the 4 works?

@ noni, I'm in total agreement with you about his status. He understands the part about people being awe-struck around him, I'm sure. After all, he's been doing his thing for more than 5o years.In respect of the assistant bit, I'm going to beat you to that.

@ mamarita- I understand exactly what you mean. He is a gift to many generations and we should be grateful (no matter how corny that sounds). I have thanked God for him too. The works are in July. Watch this space.

He's fantastic... I read about two of his books back in Nigeria... he's a genius.. although one book I found quite hard to really understand/follow.. i mean i could understand the words and stuff but it didn't follow? i don't really know how to explain it... i think i might have that book at my family home.. if i can find it.. i'll tell you the name... i never finished it.. maybe i should try again(lol... a year or 2 might've brought me a little more knowledge)... A season of soyinka is the play?

ONB, I own quite a number of his books, autographed too (brag, brag).
If you tell me the title, I might be able to point the way? Some people have complained of "The Man Died" being obscure.

"A Season of Soyinka" is actually a period (July) where 5 plays written by/about him will be presented.

nice to know friend~
i want to ask you about "the swamp dweller...." by Wole Soyinka,,
i need know about it,,because my assignment about this story,,,
can you?
if you can help me,
plz email me at
deen_nasour88@yahoo.com