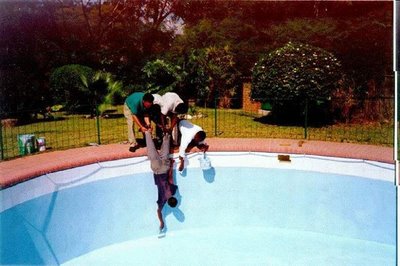 The natives are friendly.

At the French Cultural Centre at Ikoyi, Lagos, the other day, I observed the way the expatriates (the diplomatic corps, mostly) kept to themselves, dancing and chatting within their own company.
Eyes would rarely meet. The native in Nigeria is not one you make friends with, without weighing the implications.

Who can blame them?
Nigeria, now one of the most corrupt countries in the world has been betrayed by its leaders, leaving a people desperately searching for breaks anywhere they can.
So, if the Nigerian were to be humoured and a conversation started, sooner or later, the con would come… the play would be made...


How did we get to this pass? The leaders. Let no one blame the people. The systematic looting of the country for decades, the prevailing atmosphere in which fools are made kings and unintelligent men rewarded for idiocy means there are no heroes left. There is no one to look up to, this country lacks figures that can call to us to rise above our baser instincts.
PDP primaries? Violence engulfed it. Oyo State? -Politicians burnt it. Anambra? Ekiti? Plateau? Bank Robberies all over the country? Assassinations? Bola Ige? M.K.O? Agbroko? Rewane? Daramola? Williams?


So the expatriates keep to themselves.


Met this nice young female from somewhere in Europe at the centre, a conversation ensued. And she asked for my phone number. I didn’t ask for hers. I knew I’d put her in a difficult position. She might text sometime, she might never. It’s the way life is in Nigeria. A people no longer to be trusted. Our passport disgraced, governors caught laundering money like drug dealers, the travel documentation presented before embassies by citizens are mostly fake. Hans, a friend and attaché at the German Embassy told me in conversation a year ago that the problem was, people poured in too many fake papers. They know. We know they know. They know we know they know (ad infinitum)


This New Year, I’d like a present. A new ruling class; one that is accountable, that can be complained to, that can lead us back to where we were derailed and help us continue on our journey. One that can give security to the people, provide proper health services, stop the murders, disband and re-establish the police, provide electricity and food, proper transportation, reduce crime. Apparently, this New Year, I’m deluded.
150 million people betrayed.


Its genocide, because it’s the systematic killing of a people.
Posted by laspapi at 5:31 pm

How did we get to this pass? The leaders. Let no one blame the people.

Hmmm....but you see the people are the ones that become the leaders!

Oro lo so m'dear, may God help us all in this Nigeria. I can't blame any Oyinbo for taking cover, I'd do the same myself.

It'll get better, its what we all hope for...V

I don't quite agree, nilla. In Nigeria, the people never become leaders. Haven't you noticed the same set of people, their families, relatives and scions have been ruling in our country even before independence?

I pray so, V, I really pray it gets better.

So you're saying the leaders are not Nigerian people...lol

I get what you mean when you say the same people have been ruling over and over again...that absolutely annoys me (In my opinion our constitution should even be ammended to explicitly state no recycling of leaders {and no old leaders too})

BUT I still maintain that the leaders are still the people.

Your desires for the new year are shared by millions of other Nigerians, both within and outside the country.

The truth is those things you've listed will not happen spontaneously without the people demanding for them. Apart form some scattered vibes here and there, there is nothing to indicate that the people covet these changes, not to talk of being ready to make the changes a reality.

The outcomes of the election in April will answer these questions.

The people are the leaders, just as Nilla mentioned, only if they know. The government is the people and the people the government. This is what the masses do know, or have failed to understand. And until this becomes clear, the journey through the wilderness continues my brother. So lace up those boots...tightly.

the people are the leaders, nilla?

When have votes ever been the guide for those elected in this country? MKO's Hope 93? Obj in '99? The Governorship elections in Nigeria of 2003 where INEC already had results placed on the internet that said Lagos had been won by the PDP and gave figures before votes were counted?

It's been contemplated many times before my brother but we know those in control won't give up without a bitter fight. Maybe these elections will be the catalyst to great things.

Yes Laspapi, the people are the leaders. We just have bad/corrupt people as leaders.

Will be back....I'm falling asleep already

Hi Laspapi:
You are right about what has come to pass in Nigeria and on Nigerians.

Thing however is, expatriate communities behave like this all over the world, especially in the former colonies. So this behaviour might say as much about the expatriates themselves - as about the Naija 'natives'.

@ wb- You make a strong point about the expatriate behavioural pattern. I hope the shackles of the"2nd slavery" are broken soon.

I got your point though.

The last time I heard Niyi Osundare give a talk, he said we shouldn't be calling those who are in power "leaders." He said we should call them "rulers."

I gues if we really have to use the word leader, we should qualify it: so-called leader.

Laspapi, in agreement with Wordsbody and the commentry on expartriate community, your experience recalls this passage in E.M. Forster's A Passage to India, a party scene too, in 19th century colonial India in which a couple of assumptuous Indian 'nobles' were invited to a cocktail with mostly british colonial officers. one Indian madam dropped her snout into the cultivated discussion going on in a certain group, recounting an experience in a Europen location. A surprised Britishers went "So you guys have been to that place too?" to which another nose-in-the-air britisher said: "O sure, they do pass through there on their way to England". Forster, master of sniggering satire, commented: "The way she said it, you would thing she was talking about the route of migratory birds".

But has this new snobbishness something to do with the new office of FCC? I was a fair regular in the Rewane Road office and never noticed that.

ok nilla, I must use araceli's line here and reverse my 'agreement' with you again. They are rulers not leaders. Apt, I think.

@ Deji- Wordsbody's lines made sense and as you wrote, "the migatory bird" philosophy is the superiority complex of all colonialists.

I think the reason you might never have noticed previously is because you did not condescend to humour such behaviour whether from expartriates or otherwise. But its always been there.

But you know a ruler is also known as an acknowledged leader.

I'm gonna hold a gun to your head if you don't give up, nilla