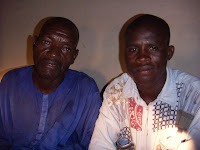 The most surreal thing happened to me tonight.

I had driven home from a Committee of Relevant Art (CORA) meeting and was waiting for the security guard at my home simply known as “Baba” to open the gates. It was dark as the Power Company had done the expected. The gates opened and I drove in, I noticed Baba wasn’t alone, which wasn’t extra-ordinary, he sometimes has guests.

As I came to a halt, engine still running and headlamps illuminating the guard-house, I got a better look at his visitor and thought there was something familiar about him. I looked and looked, not getting out of the car, the car still idling. Then I stepped out. And asked Baba in a friendly manner who his friend was. Baba said, “this one na my brother. E no dey hear”.

It was the “deaf and dump” (sic) guy whose picture I had taken on Adeniran Ogunsanya Street a few days before (scroll down blog) and whose haunting look had disturbed me so much. I guessed he might have been Baba’s different relative or someone he knew from his hometown hence the tag, "brother".

I asked to take their photograph and they happily obliged (Baba on the left), the car's headlamps as our "camera flash". He didn’t remember me from the last photo incident. I showed them the photos taken and "our guest" made signs/sounds of pleasure. Surreal.

So my brother and my countryman has come where I live. His name is Mohammed. And I wonder, is there a reason for this? Of all the homes to come to, he came to mine days after I took a photo of him on a busy Lagos road. As Wordsbody asked, what have I done for him? What can I do for him? Does this 2nd meeting mean I am destined to do something for him?
Posted by laspapi at 4:46 pm

Yes, Laspapi, your paths crossed, the circle has started and the circle must be completed.Fret not, things have already started happening, you will eventually do something for him or he might be the one to change your life? who knows? we think automatically that "we" are the ones that can offer help because we are more fortunate? A lot can be got from life, a lot of lessons can be learned, the mysteries of life can not be underestimated. Good luck!

really weird i must say, sometimes these things happen and you truly ask yourself, is this just a coincidence or part of a bigger picture.. i don't believe in coincidences though, i think thats its just Gods way of choosing to remain anonymous and that if you have that pinch to do something for him, then do go ahead and do, life is short, touch as many lives as you can, you have nothing to lose but your anonymity... i just read some of your posts, really interesting and nice interview with True love...i read it a while backa nd was pleasantly suprised to discover that you actually left a comment on my blog, do visit again..

Laspapi, If you've read/seem my plat, Botching of a Brute, a blind old begger walked into a home, seeking shelter. He was grudgingly let in by the head of the home. Really, it wasn't an auspicious time, it was meal time and this ddnt look like someone to share the ration with. But after some conversation, the head of the family was soon calling him 'wise one,' even an angel. The blind begger would later lead the family to 'safety' or escape, so to say, from their misery. Moral? What Wafarrian said: You might be needing your poor guest. Cheers.

odd....really odd..he's definitely in your life again for a reason..no matter how little.. i agree with Waffarian,you will make something happen for him..or vice versa..either way i forsee something positive...

@ waffy- I await what ever might unfold. It struck me as very strange. I might not have recognized him if bloggers hadnt commented on him so much the first time.

@ ziariz- Once might be coincidence but not 2ce. There's something afoot and I hope to gain from it in some way.
I'll stop by again,ziariz. Thank you for coming.

@ deji- there's a scripture-"be not forgetful to entertain strangers for thereby some have entertained angels unawares"- I agree.

@ gold mine- I know what you mean, GM. Something good will come out of it. I know.

Eerie!But one thing I know for sure is, life doesn't make sense.(Chaos theory, remember?) So one should not try too hard to make sense of it.

Pretty surreal. I agree with what someone else wrote, by helping him, you might find that you needed him a lot more than you think in fact a lot more than he needs you. God throws people our way for a reason and I don't think this is a coincidence. Please keep us posted.

Its truly a small world after all... I think you should teach him how to fish, rather than give him a fish, so he doesn't keep coming back for chips!

@ kiibaati- I agree with the eerie bit. It's slightly disconcerting.

@ jola- I'll see how this goes, jola. Sometimes, I have "called" myself to people without actually being called to them, waded into situations in which I gave of self and met no appreciation of help offered. Maybe mine was just to help though, the great tapestry would express appreciation some other way.

nyemoni, I'll remember to open a fish n chips shop for him, hehe. (I like the analogy)

Hmmm - it is a strange world. At the very least, correct his sign so it reads "deaf and dumb".

So what did you do in the end?

what a small world

This world is microscopic. I am with Nyemoni on this one.

@ noni- not very hard to figure you don't live here, noni. They all have signs that say "deaf and dump". I think someone has a contract to write that thing for them.

@ in my head- really strange things happen. I'll be looking to buy him a fishing rod soon. Figuratively.

emi overhead? papi abeg rephrase oh... something along the lines of 'gorgeous' 'sweet pineapple' or 'honeyskin' will do... lol... overhead no sweet at all...

I must have been cross-eyed from a lack of sleep. That was a cross between "In my head" and "overwhelmed". Hmmm, I ought t get a psychiatrist look at the hidden meanings there. Sorry Storm, my gorgeous sweet-skinned honey-toned pineapple

Life appears funny but realize everything happens for a reason, its not mere coincidence or chance. Sometimes our mere mortal minds dont have the capacity to see such at that given time. I think you have a lot to learn from him as much as he has to learn from you. May the channel be opened in you to receive that wisdom needed to make it happen!

Thank you, God's Child. These are good words.