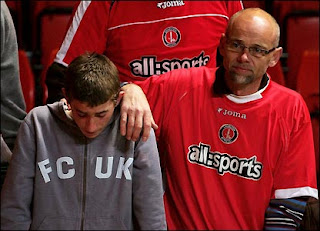 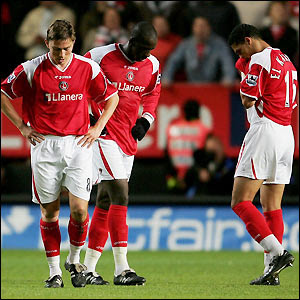 They call it Britain's most watched drama series. It is English Premiership football, followed avidly around the world. I am a fan, watching live matches as they are played in far away England on a regular basis.

Last Monday, I watched as Charlton Athletic Football club was relegated for the first time in 7 years after losing to Tottenham Hotspur. As the game drew to an end, Charlton supporters rose to their feet as one; men, women and children singing the club's anthem, waving scarves that read, "we'll be back", father's wiping the tears off the painted-on-beards of their little boys as their team went down. It showed the resilience of the human spirit in the face of adversity.

Charlton will lose an automatic income of 16 million pounds payable to each team in the top flight, jobs will be lost by the staff of the club as costs run high without a corresponding increase in income. Still the supporters sang, as boys and young men cried, struggling to clap, supporting their team to the very end.

There were no fair-weather friends at the stadium that night and even if Charlton returns to the top flight in a year, 10 years or never again, I shall always remember in my mind's eye, the pictures of fathers and their sons, shown around the whole stadium, bound in adversity and lending strength, one to another.
Posted by laspapi at 7:03 pm

Wow... i support Arsenal ( for different reasons..one.. being my family are all Arsenal supports so ..simply a case of follow follow..and 2...Lunberg and Henri:).. but.. i am also a closet Chelsea supporter...lol.. i can hear someone saying..so you are not a true Arsenal supporter..But i do find it amusing how most men and some women are sooo passionate about football..Laspapi..even your words had so much emotion..lol..

men crying?? men don't cry at what you would consider normal.. but they can somehow cry when their team loses.. I can remember..i offended a guy once when he said he supported Stoke-on-trent..lol.. i only asked if they really had a team.. he didn't speak to me for the whole day..:( football, the one game that always brings people together..

Awww how sad..... Football is one thing guaranteed to make MEN shed a tear, two even, I've watched my brothers cry over their 'side' losing....it's more than just the money... I feel for them sha, but I am a RED DEVIL for life....

aah, but I do feel gold mine on the Closet supporter thingy... I have the closest thing to a crush on Didier Drogba.... My hubby's a Chelsea fan so he must not hear cuse I CURSE CURSE HIM OUT openly whenever the blues play, but secretly.... I'm almost in love with that MAN! ;-)

Hehehehe! I don't get it, the only time I cry during sports, is when the athletes/sportsmen/women, recieve their medals and they start crying when they play the national anthems, especially the russian anthem, so beautiful and powerful!
@nyemoni, heheheh yes oh, Drogba, my my my!

all this romantic writeup for only a football team? lol(i know every dude is going to blast me for that... but if you were talking about shoes or a seriously sexy designer bag... ehn ehn.. no problem.. but only men pushing a ball accross the field... mogbe!!!

i probably only watch soccer when the super eagles are playing... now talk about ice hockey and winter sports... gymnastics.. ehn ehn.. then i will understand.. lol

Overwhelmed Naija Babe: do not mind all these people. Getting emotional for just a game of football. They need to watch Ice Hockey popularly called Power Game. A game that has no throw-in, Over or corner but continuous play. Some of these footballers cannot survive a game of Ice Hockey.

gold mine- I'm not even a Charlton supporter, but to see such an outpouring of hope, of bonding and so much emotion? It got to me.

@ nyemoni- I support any team but Chelsea. I think Jose Mourinho is the anti-christ

@ you're a strange one, waffy. The Russian national anthem? You're a closet communist, hehehe

@ Storm- someday you will see the light. Football is the complete sport. Ice hockey? gymnastics? Which reminds me-one time some male Naija-based athletes in leotards said they were going to become gymnasts and pranced around the National Stadium. On a diet that's 95% carbohydrates? I nearly had a fit from laughing.

@ migiets- na you know o. Ice hockey? That crazy game that allows people try to kill themselves? Isn't it rated as the most dangerous game in the world?