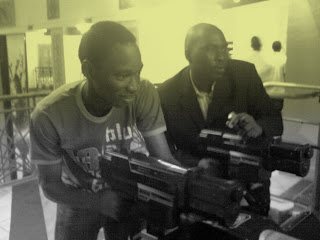 I had a meeting at 5pm on Victoria Island on Tuesday. Knowing it to be suicidal to attempt driving back to the mainland in rush hour traffic after the meet, I strolled into the Silverbird galleria at about 7pm, determined to catch a movie and just drift till the traffic eased. I got a ticket for The Fantastic Four {The rise of the silver surfer}and had about an hour to burn so I turned to the video arcade in the galleria and begin to shoot up villains in Gunblade-Special Air Assault Force. After buying several hundreds of naira worth of tokens, I noticed two young men looking at my game and commenting on my shooting skills (yeah, in every man lies the childhood desire to shoot up an entire city). After a while, I offered to buy tokens for one of them, Clement, so he could join the shooting spree, which he did. His friend, Henry, took this picture on his phone as we glared at the life-size screen and killed steriod-assisted rogues with RPGs (Rocket Propelled Grenades) and bazookas. When I stared at the photo after, I was surprised there was no fire blazing from the gun muzzles. Henry and Clement came to see their friend who works at the arcade and were very grateful for the chance to play on the games. These little things...

...so much concentration, looks like fun though. I really love the way guys are able to bond sooooo easily, and stay cool for soooooo long too. It's nice to make new friends, increase contacts etc etc, nice. One time,my female housemates and seized the guys game cds, one silly thing they played 24/7 on the only computer we had and deprived us all of quality time with better people. It was warrrr, they were so mad at us, then they 'burnt' new ones off kazaa and continued to torture us, lol.

It's a man- thing, omosewa. I suppose men aren't as complicated as women are. Don't sieze men's computer games o! It might be regarded as a threatening gesture.
I intend to get a Play Station shortly, then I'll officially qualify as not having a life.

Hehehe@not having a life. As long as you dont play it 24/7, they're very addictive. And, lemme scare you a little. One Asian dude played for 50hrs straight and died, he didnt get up, i think his heart failed or something like that. So dont do that, okay??? LOL, i'm a case abi, i know i know:D

'sewa- I know how addictive those things are, so believe me when I say, I won't play for 3 hours straight not to talk of 50. What am I looking for inside d t'ing? I'm addicted to TV and movies yet I know longer watch more than a movie at one time. When I was at the law school, I could do 4 in a row.
And yes, you are a case.

This takes me back to all those years when I wanted nothing more than to be a man.

@ idemili- I never wanted to be a woman. Something to do with the pain of child-bearing...

that silver surfer was rubbish jo....