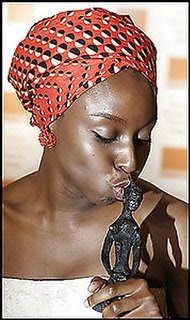 Adichie, 29, also the youngest author to have won the prize, was awarded for novel "Half of a Yellow Sun," set during the Nigeria-Biafra conflict of the 1960s.

She beat out finalists including India's Kiran Desai and American writer Anne Tyler for the $60,000, awarded for a novel by a woman published in English. "Yellow Sun" was a finalist earlier this year for the National Book Critics Circle fiction prize.

Adichie had previously been a finalist for her debut novel, "Purple Hibiscus," in 2004.

The award's full title is the Orange Broadband Prize for Fiction after its sponsor, telecommunications company Orange.

A week later and you finally noticed! Better late than never, I guess.

ifeoma, didn't just want to scribble anything. oya, forgive me.