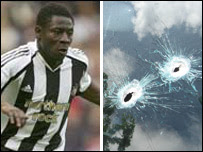 The Newcastle FC Footballer, Obafemi Martins, was taking a drive around Lagos after coming to play for the National Team when he stopped to get some petrol at a filling station. A car drove up to his and gun shots were fired at his vehicle. He escaped injury but another person in his car was injured. (Picture shows the windscreen of his car)

Martins has since returned to his base in England and in interviews granted to the British Press, the visibly shaken player said he wouldn't be returning to Nigeria in the near future.

There are tens of millions trapped in the mess here caused by bad governance who have no escape routes. Who will speak for these people?
Posted by laspapi at 3:43 pm

I agree it was sad what happend to him... put for him to make that comment to the UK press ...it just does not sit well with me.
Bad things happen everywhere...
In the UK here young ppl are killed left rigth and center! gran mothers are raped and killed! ppl are gun down by druggies at the ATM ...I live out side London, a decision we made to avoid our kids growing up in a bad area and for better schools...only last week a boy of about 8yrs was nearly abducted...now my daugther who is nearly 10yrs can not walk to school which is lessthan 5mins from home without an adult...

pls tell me what kind of life is that?
Where do we run to... and pls dont say the we have that police.
My car was stolen parked outside our house a couple of years ago ....it has not be found yet!

Bad things happen everywhere..
That does not mean we dont have along way to go in Naija,I just don't think Martins should have made that comment to the UK press.

hmmm... Im actually of the opposite thought @Refinedone... I mean... I wouldnt want to go back to anyplace that I had just experienced some kinda trauma... so it's only natural..

it's only natural for him to feel that way!
@refidone it's true about the world becoming increasingly violent, but naija is pure anarchy! it's like comparing apple and oranges.
papi,
no place to run, stand and fight for ur rights. ur country needs u. a change will come when all the smart and talented young people coming up decide they've had it with all the old carcinogenic cronies in power.(u have got me started!)

@ omosewa- I think it does too

@ refinedone- the man got shot at. Of course, he must have run in fear. I know Britain itself has its troubles but you have a police force that's trained and equipped to respond. That's a major difference.

@ sherri- we can't lie, there's anarchy. Didn't want to blog about a near-horrendous experience with another set of area boys/robbers 3 days ago.
hehe at "getting you started"

Refinedone said...
This comment has been removed by the author.
Friday, 29 June, 2007

Guys, I dont disagree with you all.
What I am saying is, I just do not see the point in feeding the Western press more foudder, without positive solutions...they are not going to do anything about the problems we have in Nigeria...

like you have all said...about the anarchy...what do the ppl in Nigeria, that can't run and take
time out to get over their trauma do?
What would/could be helpful is ppl like Martins both abroad and at home get together and put pressure on the government and help find solutions...if it means we have to help fund and equip the police force( I know a couple of ppl in the UK and States that are planning such)....something like that,is all I am saying...
We all dont have to go back home to be effective...but we can still be effective from where ever we are in the world.

Fuck! The British Press had a field day with it. Another one bites the dust; yet another Nigerian who has now, through the acts of his fellow men, been sold into 'slavery'.

Hey there,that martins story is a lie o! he wasnt even in the car,it happened that his friend was the one they shot at,his friend borrowed martins car.hehehehehe...lying martins! all for press. I'll send u a link later.