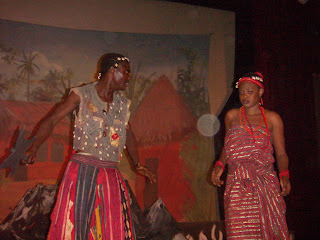 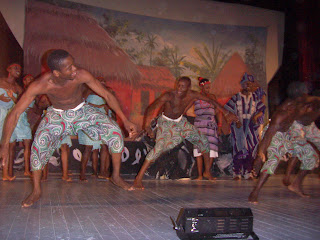 Today I went to the National Arts Theatre to see the stage play, Oya, (The Goddess of the Whirlwind) written by Lekan Balogun and directed by Steve James. It had Kenneth Uphopho as Ogun, Toyin Olokodana James as Oya and Olarotimi Michaels as Sango.

Even though based on the legends of old, the story is one that has plagued mankind since the beginning of time. According to the playwright, Oya and Ogun are married, but Ogun the god of war, has little time for anything else apart from warring. Oya, desperate to have a child and tired of Ogun spurning her pleas for him to tarry awhile at home and make her pregnant, willingly falls into the hands of the seducing Sango. There is an epic battle between Sango and Ogun over Oya, their armies standing by as the fight goes on.

In the end, Ogun gives up Oya, refusing to fight any longer. It could have been a 21st century tale, well told and acted as it was.
Posted by laspapi at 3:41 pm

i remember a lil bit of Oya's story from the movie "Sango" dat was made a few years ago...would like to see this...are there any books detailing more about her?iv read loads on Yemoja but not Oya.

It was my second choice in school too, mamarita. Hope to get a Post Graduate Diploma in it shortly.

@ vixen- I could help ask around for stuff on Oya. I'm personally trying to gather stuff on all these characters.
According to the people of the carribeans that are of Yoruba extract, she symbolises sexuality which is the angle lekan balogun took it from.
Ogun is reputed to have given up his ability to father children for the power to wage wars successfully. Purists also go on to say Ogun and Sango didn't live in the same era, Sango came many generations after.
For the bit about whether Sango hanged himself, I'd need a whole blog to discuss that with you. His adherents say he didn't, hence the name, Oba Koso.

I love Nigerian plays - I think that it is very much our forte - especially over Nollywood. One of the best I've seen was a rendition of the Gods Are Not to Blame by the Dramatic Club in FGGC Akure - my almater. All female cast. It was splendid. I have a fantasy to play the part of Ojuola (I do not consider myself a good actress). Maybe, maybe, maybe one of these days.

I did "The Gods" for the Muson festival last year. I must be immodest and say it came out really well. Maybe we'll see what you can do someday

sounds lovely... i'm a big fan of words... so when plays are well written... i love them dearly