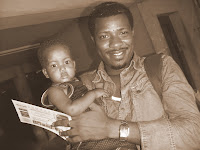 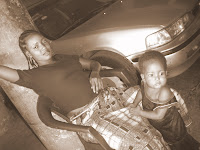 After a meeting of cast members of “Anatomy of a Woman” at the office, Bolaji Alonge (Mohammed in the drama) and laspapi walked to the car park where we met Malik and his mother, Zainab. (in the picture, Bolaji carries Malik in his hands).
Zainab (seated in picture) is a 19 year old Malian who had Malik out of wedlock for her boyfriend (now missing in action) who comes from the Republic of Niger. Her parents live in Togo but she’s now “holidaying” with her Uncle who sells sweets and ’wosi-wosi’ outside my office building.
I wondered at life and how it sets some on one side of the fence and others behind the bars. If Zainab had driven past in a nice car, we’d probably have craned our necks till we ran into a lamp post. I pray for a good future for her and the playful little runt, Malik, a future that’s kind to him and allows him to be all he can be.
Posted by laspapi at 5:46 pm

She is stunning! Life!

She is one of many teen moms...but the important thing to remember is that life goes on and I hope she is on the road to creating a good life for herself and her son. Learning a trade, going to school, generally creating an independent life for herself. I am sending her positive vibes that all turns out for the best.
As always thanks for sharing!

@ wienna- Seriously doubt if the guy's in Europe, He's probably some kid himself.

@ waffy- I agree with you

@ mona- she really is

@ jola- I hope so too, jola. I might have a conversation with her about that. Thanks for the positive vibes

Zainab is a cutie, she's repping nicely for the Malo babes.

Bolaji is quite cute too, lololol dont tell him i typed that pls:D

yeah, Omosewa, Zainab is pleasing to the eye.
I'm sorry I told Bolaji about this lovely girl with a lovely name (you) who thinks he's cute. (laspapi sings)"Please forgive me, I don't know what to do"

don't worry, omosewa. Bolaji's level headed, he's just bent on marrying you for the statement you made :D

for some reason mohammed reminds me of some musician(cant remember his name... sunny nneji?).. hes a cutie though... zainab is beautiful..whats wosi wosi though? her kids adorable

wosi wosi's yoruba (or something) for bric a brac, odds and ends etc
Bolaji's gonna run mad. He comes checking comments from time to time.