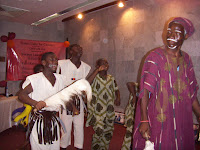 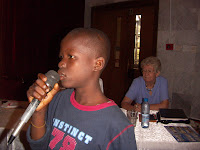 Three weeks ago, I was Master of Ceremonies at a fund-raising function organized by a non-governmental organization, Sisters United for Children, (mainly female professionals in various fields)in conjunction with Child Life Line, another NGO dedicated to the care of Children in need. CLL is headed by Mrs. Marion Sikuade, an Irish lady who has been in Nigeria for decades and who married a Nigerian.
Wandering, homeless Kids are picked off the street and from their abodes under bridges, from the beaches (Kuramo is a favourite hangout of these children)and given a new life, sent to school, fed and clothed. They have children in University and polytechnics now and many have learnt trades.

An example is the 11 year old holding the microphone in the picture, whose father beat him for sport, threw him down the stairs once (see the gash on his head) and repeatedly threatened to kill him for just being there (no particular offence). He fled from home (Oyo State) to Lagos, thereafter and says he would rather die than return. It's a hard life for some and we all should be grateful for the upbringing taken for granted.
Posted by laspapi at 5:13 pm

Thanks uncle wole for enlightening us on dis aspect of our society. For a child like dat to say such a thing,he must've really gone thru a lot. May God continue to reward such NGOs o.

"Aunt" Wienna, I could feel the kid's trauma as I stood next to him.

@ waffarian- I join you in thanking God too, waffy

Nice. Mrs Sikuade is doing something i hope to do as well one day. Thank God the little boy found the courage to run. And i totally feel you on being grateful for good upbringings.

Omosewa, that's a commendable ambition. Looking forward to the time I can be of help in that venture.

You can be of help to me Laspapi.

There is a young girl in my neighbourhood,whose mother(or so I think) beats the shits out her virtually everyday.

She looks for the lamest excuse,from not helping her younger ones with their homework to she not smart enough.

Neighbous have often times spoken with her,she will stop for a few days(and in that break,she starves the child,threatens her,or punish her).
She is not a fustrated poor woman,infact she lives with her husband and 3 other kids but takes exception to beating th girl.

Her husband is liverless,spoken to her but she persists I guess He is afraid of his wife.
What do I do to help her(the girl)

Anonymous,
that's a heart-breaking story. Sometimes I wish our society was more advanced than it is now.
If the child was homeless, Child Life Line/Sisters United for Children would move to help immediately but when parents are still in charge...

Ideally, one should be able to report to
a) The Welfare Department of the Ministry of Youth and Social Welfare in Alausa-Ikeja or
b) The Police

but I have my doubts that the latter can/will do anything. Maybe the Ministry at Alausa?

Its a good thing you're so concerned. We've had parents beat their children to death and others place their hands/feet into fire to 'cure' or discipline them

master of ceremonies huh? i'd love to have seen that... lol.. cutee. God bless this little boy... we both 'know' him