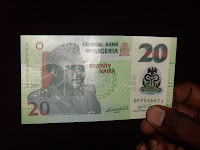 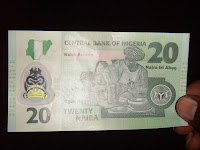 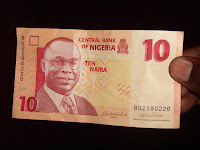 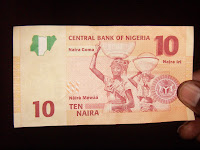 New notes were introduced into the Nigerian economy. I thought I’d show a couple. They’re smaller than the ones we had previously and the Arabic inscriptions on the notes have been removed much to the chagrin of the feudal lords of the North. According to them, Northerners will now be unable to read the Ibo, Yoruba and Hausa words announcing the denominations on the paper money.

Worthy of mention is the N20 bill which feels different from all the others. I saw the N10 and N50 bills as well. The N20 feels like almost like the stuff of film, you know the material used to laminate documents and stuff before it goes through heat. I’m sure you’ll see what I mean soon.

I made my mai-guard (security guard at home) hold the notes. They were borrowed for a quick photo shoot from other security guards on the street.
Posted by laspapi at 3:38 pm

They look quite good I must say very impressive. Thanks, now I can tellmy Naija folks about it and feel really cool with myself for being the most Niaja of the lot.

Qustion; since you are in the arts in Nigeria, what is your thought on Hollywood using African America actors in African roles.

Thanks for sharing. The "laminated feel" of the notes should prolong their shelf lives I hope.

hmmmm... I know they're different from the old ones but i'm not sure how cos I don't really remember the look of the old nigerian currency... shame cos i've only been out of Nigeria for 6 years... i mean I know the colours... 5 naira is like a light purple, 10 naira's red, 20 nairas green, 50 naira's grey?... i saw the 100 naira too...i think that was a light reddish orange? and 200 naira was like a lighter green than the 20's... I never saw the other denominations... dang.. i really need to transport myself back to naija asap!

Laspapi,
You forgot to add that the Arewa watermark designs on the edges of the old notes are now missing, replaced by general African and other common motifs, some of them quite comparable to the Kente save that they come in monochromes rather than the multi-colour Kente. This hould provide psychological relief to many Nigerians who think that a certain part of the country had spent the last so many years quietly superimposing its signs, symbols and insignia on our national properties.

The Arewa symbol is beautiful by the way, only that when you put its monoply on our currency together with other things, its aesthetic significance begins to pale, like the water mark it is, behind the heavy colour run of supremacisit politics. And in any case, why didn't we also have Uli, Nsidibi and other designs as well. Or the animal motifs of the Oshogbo Art school.

Is it this plastic new note that is making some people behead both the dead and the living?

Can't wait to start spending the money,even though I fear,I won't want to spend it I 'll just want to hoard it and admire it.

Arabic inscriptions on the notes have been removed much to the chagrin of the feudal lords of the North. According to them, Northerners will now be unable to read the Ibo, Yoruba and Hausa words announcing the denominations on the paper money.

Lol
What a foolish excuse,the blind beggers in Lagos can tell difference. How many of us could read the islamic inscription?
They shouldn't spend it o! they should let the money go round sef.

But I wonder if the coins will be accepted. I will use it,for all those people who sell things at 3999.99k I have got change!

I'm glad they've had the spine to stand up to the feudal lords. Having Arabic on Nigerian notes was stupid and lots else besides.

Making your mai-guard hold the notes while you photographed, ehn? The poor man must think his boss is bonkers. You know, how 'normal' folks always think we arty types are way odd... Happens to me all the time;-)

@ omodudu- I don't know how to tell these people Forest Whitaker can never do an Idi- Amin like a Ugandan or some other East African would.
After watching Blood Diamond, it should be plain to see that Djimon Houssou (Did I get that right) was so good in that role because he was being himself
You make Don Cheadle act the part of a Hotelier in Rwanda? These continent cant be scoured for one actor to play an African Hotelier?
Still, its the golden rule. He that owns the gold, makes the rules.

@ Storm- I think they maintained the colours of the notes. If you look at Deji's comments, you'll see the differences in the new and the old notes.

@ deji toye- That was well-written. Those details will be very helpful to the folks in Europe and America who need to know what's going on concerning the new currency.

@ omohemi- way to go, babe. But will the coins ever work here again?

@ wordsbody- The fellow's given up on me, I think. From time to time, he opens my car boot and it looks like an Ogun Shrine. How often does one explain its just for some stage play or suchlike?

I love these new notes. They are smaller and finer and for now (and hopefully a long time to come) they are CLEAN!

How many times have we had new notes in Nigeria?

...and the Arabic inscriptions on the notes have been removed much to the chagrin of the feudal lords of the North. According to them, Northerners will now be unable to read the Ibo, Yoruba and Hausa words announcing the denominations on the paper money...

So why are the words not in english or pidgin english??
Should the non-Ibo, non-Yoruba and non-Hausa people feel they are being left out?

Kai! You people are not good o! What did the notherners do to you? Nigeria belongs to us all. One Nigeria.

On Hollywood, quick look at your stance will show that it would not be possible for Africans to play any Shakespearean role outside of Othello.

@ in my head- Amen to the prayer on cleanliness

@ nilla- South-South babe, I know where you're going...

@ anon- your logic can't be faulted about Othello being the only role left for "us" if my argument is taken to its logical cnclusion. Still, I think African actors should be given a chance to try their hands at these roles.

The CBN thinks it has removed the arabic signs, but I still see it there. The "Feudal Lords" don't see it there however. Neither do you laspapi.

What was the CBN thinking anyway, removing the arabic signs to replace it with wazobia phrases? Thanks Nilla. What do you want the Isoko man to read? Or a man who only speaks ghotuo.

Anyway. Methinks cognition is what matters. The agbero, or the illiterate beggar will still recognise a "muri" from a "waso".

The dollar has Latin afterall. Why not arabic, as long as it doesn't say "mohammed is..."

And again (refer to the first sentence), the numerals 20, 50, 100 etc are afterall arabic numerals and have not so far caused any pious pneumonia to any christian/secular spender of the money.

igwatala,
I've never been grouped with the feudal lords before but I do see the point you've made.

The same way your happy that the arabic inscriptions have been taken out, will probably be the same way that some other Nigerians will feel when/if the wazobia writings are taken out.

Is there a cut off date to turn in the old notes? I have a couple of 20,10 and 5 naira notes and I am not coming home till August.