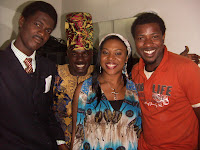 laspapi’s stage play at the Muson Centre, “Anatomy of a Woman” went without a hitch. The cast and crew lived up to the director’s expectations and the audience loved the performance. There were two shows, one at 3pm and the other at 6pm.

Rehearsals had been difficult, as Stella, with a work schedule that would have felled lesser people had to reschedule a few times.
During the rehearsals for the show, Stella showed why she (even though under 30) has been one of the biggest actors on the African continent for a while. She interpreted the character accurately and even though rehearsals swung between her place and laspapi’s offices, she stayed on top of things.

There were people from everywhere at the show and remarkably, they all seemed to like it. Stefan Cramer of the Heinrich Boll Foundation and his wife, Erika, had thought it would be soap-opera-ish but underestimated the genius of laspapi (hehe). They liked what they saw.

I met other bloggers, Ore and Jesus' Gurl in particular. Apparently, Omohemi Benson was there as well but we didn’t get to meet. I wish we had.

Now after the tiring, gruelling performance, Stella told me she (and Kate Henshaw) were going across the road to the City Mall to unwind. I went to see her after we'd finished packing our stuff and cast and crew were ready to go home.

And there, she beckoned me to lean closer and told me something I had never heard before.
laspapi is one of the country's most consistent large scale theatre producers. Some say he is the most consistent. In all my performances, I had never heard anything like what Stella said that night.
This A -list actor... (I had seen her during rehearsals refuse cheques of close to a million naira from Nollywood producers because she wasn't satisfied with the quality of work offered), this A-list Actor said she wasn't going to collect payment for the stunning performance she put up. She said her work had been for free. Stella was meant to have collected a sum of six figures from me but she refused to be paid.

She said it was to encourage the theatre, save it from the slump it was in, (She's a graduate of the Creative Arts). She said she'd seen the expenses incurred and this was her contribution. She had shown no inclination of her intent during rehearsals, working as hard as the others did to ensure it went well.

So I sat numb in front of her, kept hugging her without being able to say anything. And now I'm telling the world about this lady with a heart of gold.
I told Agatha Amata who called her to say thank you, and Jahman Anikulapo, editor of the Sunday Guardian will be publishing this unprecedented move by an actor in an industry peopled with those who look after themselves first and with good reason.

Stella did the impossible, worked without pay, and in me she has found an adherent for life. Sometimes, getting up close to people shows the real "them". Stella's just a girl (like "Anna Scott"/Julia Roberts in "Notting Hill") but she's a lovely, lovely girl with class and as a human being, worthy of all respect.

In the picture from left, Stella and her suitors after the show- James(Olarotimi Michaels), The Boss (Kenneth Uphopho) and Mohammed (Bolaji Alonge)
Posted by laspapi at 8:49 pm

Heyaaaaaaaaa! How nice of her! Stella, she must be a very humble person, not like those "stars" with mighty egos! Stella, we thank you oh! Laspipi, well done!

Glad the show went well!
Are we going to see more pics of the show?

And that was mighty sweet of Stella. We need more people like her that are more interested in quality!

WOW! Bless her dear heart, that was real kind of her. And I wanted to study theatre arts for my undergrad but the requirements for admission were too much I decided to stick to IT.
Laspapi, one day in the near future, your name will be in a playbill on broadway...All I ask is that you get me two "golden" tickets when that happens *in the near future* :)

Sorry I missed the show. I'm in a new environment, so it's difficult to get a "sick leave" yet. Hope to see the next one though. I will find an excuse by force...

Wow I have to say I really really now respect her for that :o) glad it went well, I know that boellnigeria funny enough :)

That was very nice of her,
I am proud of you,laspapi,you did a great job,you got me reeling in laughter and nodding in truth.

REALLY?! That's so beautiful. You know, each time I see Stella; there's always something transparently good about her. From the very first time I met her (those days of 'nobodyness' o!Lol) on New Dawn, there was this transparent desire to touch the next person's life.

You know how you just see someone and know this is a good person? Glad you're making noise about this; people should know. Especially the gang that said such nasty stuff when Jaiye died. I am so tripped by this her gesture!

About that Lifetime Achievement award ... em... hold on lemme just go and have breakfast first!

By the way Omohemi, I've been trying to drop a comment on yoir blog without luck! So I'll just do it here: go and update young woman, and stop hiding under comments on other people blogs!!!

Wow - that was fantastic of her and good on you!!!! Glad it went well. Congrats on being the most consistent theatre producer! ;-)

I am glad it went well. That was very gracious of Stella...it also shows that she loves what she does and is not in it for the money or fame. If only more people were like that, but then we can't all be the same, I guess that is why our world is so colorful

Get some well-deserved rest laspapi

I echo mamarita...see you on Broadway

Wrote a small review on your play on my blog.

such a noble soul!

p.s. do you have anything scheduled for this summer?

@ waffarian- she is different, waffy. It was good to know the real her.

@ nilla- Thanks girl, I hope to put more pictures up soon.

@ mamarita- Thanks for the Broadway prophecy, mamarita. And the tickets are yours.

@ araceli- hope to see you too. We miss you and the crew.

@ mona- It takes things like this to have insight into another's persona. You are the champion of research. not surprised you know "boell"

@ omohemi- Thank you for coming, I'm going to read that review now

@ chude- people love salacious gossip. Coincidentally, I met Stella first on the New Dawn set when she and I came for an interview years ago. Working closely with her showed me the "real stella".
As for my award, if I dont get it, you'll be reading horrible stuff about yourself in the newspapers.

@ jola- thank you for being a good friend. Stella displays a love for the Arts and an unwillingness to compromise quality. She sometimes spoke about her travails in Nollywood for standing up for what she believed. There'll be tickets for you too, my friend, when I hit Broadway.

@ tp- Thank you very much. There's "A Season of Soyinka", 4 plays of the master and one of mine (Who's Afraid of Wole Soyinka?) every July Sunday at Terra Kulture. There'll be more details soon.

Awww, that was really really nice of her!!! Please post the newspaper article if it shows up online.

Laspapi, i'm doing great, how are you doing? You're responsible for my crush on Bolaji, see that lovely smile!!!:D